Protesters occupy the roof of a “drone” factory, Shenstone (left) and one of Gaza’s tiny victims (right)

London Palestine Action, a network of people in London taking creative action against Israeli apartheid through Boycott, Divestment and Sanctions (BDS) began a roof-top protest at Shenstone, Staffordshire where parts are produced for military drones. Activists shut down a factory, calling on the British government to “Stop Arming Israel” from UAV Engines Ltd and for bosses to be arrested. They claim that drone engines manufactured at the factory have been exported to Israel in 2010, 2011 and 2012.

Protesters tweeted that they were locked on the edge of the roof at a subsidiary of a company called Elbit (owned by Israel) ready to peacefully resist with enough supplies to keep them going for a week. Highlighting what has become an international campaign for BDS they had a strong message for Prime Minister David Cameron stating,

“by allowing this factory to export drone components to Israel, UK government is providing direct support and approval to Israel’s massacres.”

Attention was drawn to claims that since the beginning of the ongoing Israeli military assault on Gaza, Elbit Systems shares have climbed 6.1 percent. Killing is a profitable business!

The Guardian reports that according to Downing Street, the British government is now reviewing the sale of £8bn in arms and military goods to Israel to see whether each licence is appropriate in light of the conflict in Gaza. There have been accusations of “war crimes” from human rights groups with the United Nations calling the bombing of schools “a moral outrage”.

International pressure is growing. Haaretz  just announced that Spain has decided on a temporary freeze on arms exports to Israel. Other news emerged that Baronness Warsi has now quit as Foreign Office minister for Gaza claiming British government policy on the crisis in Gaza is “morally indefensible”. Bolivian President Evo Morales has gone as far as labelling Israel a “terrorist state” and Israelis must now have visas to visit. Meanwhile El Salvador, Chile and Peru recalled their ambassadors back home and more moves are anticipated from other Latin American countries.

The London Palestine protesters urged others to join them and stated that they were occupying their time reading classics such as John Roses, “The Myths of Zionism” and Ben White’s “Israeli Apartheid: A Beginner’s guide” a clear swipe at the policies of the Benjamin Netanyahu government.

As fire-engines arrived at the scene and police took to roof level in a cherry-picker, one protester tweeted a photo of the emergency services, saying “this is who’s coming to get us. Not easy tweeting with a d-lock round your neck but we’ll keep trying.”

The plight of the Palestinian people has had an emotional impact on many, one police woman in the crane was said to be crying as an activist who lived in Gaza told her the story of the Samouni family who lost 29 loved ones. The roof protesters claim that “Elbit markets its drone technology as ‘battle tested’ a sickening boast that their drones have been proven effective at killing Palestinians.”

Hospital workers in Gaza face burnt and mutilated remains (left) while the bodies of babies over-spill at morgues (right), some having to be kept in ice-cream freezers there are so many

“It’s understandable that protesters are targeting UAV Engines given past concerns about the company supplying Israel with engines for drones.

“The government has previously claimed UAV Engines is only licensed to sell drone engines to Israel for onward export, but the fear is that this Israeli-owned company’s engines are actually powering Israeli drones over Gaza, or that the technology is being copied to allow Israel to fly its drone vehicles.

“Before these protests escalate, Downing Street should announce an immediate suspension of any further arms to Israel. We should not be complicit in war crimes.”

Women of Gaza mourn their losses

This is not the first time the Shenstone factory has drawn attention. Back in February 2014, a “Power of Prayer” meeting took place to focus on concerns regarding use of armed drones. It was attended by students from The Queen’s Foundation for Ecumenical Theological Education, Edgbaston, Birmingham. Professor John Hull of The Queen’s Foundation also penned a letter urging UAV to reconsider their role in the arms trade. He wrote,

“We believe that God, the God of Christians, Jews and Muslims who represents the universal conscience of humanity, is the source of peace and justice and that we will all stand before God on the judgement day.  We urge you to amend the nature and purpose of your activities to peaceful, non-military applications.”

“We have no ill will towards you personally and hope that your skills and talents can be put to use making alternative products that will benefit people and make their lives better.” 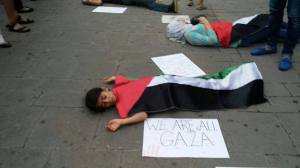 “Israeli forces failed to take all feasible precautions to verify that these targets were combatants, as required by the laws of war, or that they failed to distinguish between combatants and civilians. Israeli and Palestinian human rights groups have reported a total of 42 drone attacks that killed civilians, 87 in all, during the fighting in December 2008 and January 2009″

In recent days (July, 2014) a friend in Gaza tweeted that his young neighbour has been killed in a drone strike and that not long after the boy’s mother has collapsed and in his word’s, “died of a broken heart”.

It seems that activists may remain on the roof for some some time to come as attempts to bring them down have so far failed. Support for their actions are building, though additional protesters are being kept away from the site. The latest word is that they are attempting to live-stream their efforts with campaigner Adie Nistelrooy and others giving speeches from their perch. As a long time anti-drone activist myself, I wish them every success, to remain silent now is to be complicit in the most hideous of crimes!

Carol Anne Grayson is an independent writer/researcher on global health/human rights/WOT and is Executive Producer of the Oscar nominated, Incident in New Baghdad . She is a Registered Mental Nurse with a Masters in Gender Culture and Development. Carol was awarded the ESRC, Michael Young Prize for Research 2009, and the COTT ‘Action = Life’ Human Rights Award’ for “upholding truth and justice”. She is also a survivor of US “collateral damage”.