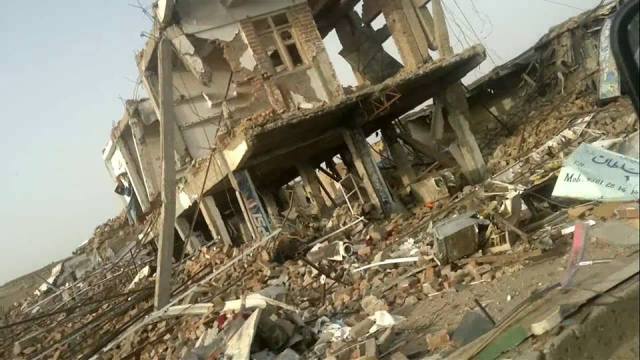 What is this were Karachi (and not Waziristan) hit day after day by drone?

The double standards within Pakistan regarding drones gets worse by the day. Once again the Tribal Areas are hit by drone strikes that just happen to coincide with a visit to the US from Chief of the Army Staff General Raheel Sharif. One can only imagine whether dialogue involves a “nod” on who the next drone targets should be?

Still NO meaningful action has been taken to tackle the US on thecontinued use of drones on the Federally Administered Tribal Areas (FATA) despite Pakistan officials recently informing the UN that drones are not required since the start of military operation Zarb-e-Asb in June. Indeed back in May, Ambassador Zamir Akram of Pakistan called for a ban on drones at a UN Conference in Geneva. So why has nothing been done in practical terms to stop people from being killed?

Its an entirely different attitude with drones over Karachi. The hypocrisy is beyond belief.Dawn is now reporting that security agencies want action for a complete ban on heli-cams (drone cameras) over Karachi for fear of surveillance operations by undesirables and turning small drones into explosive devices. Heli-cams are largely used by television companies for reporting stories but are now easily available to the public. 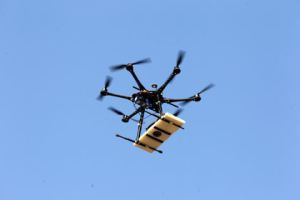 What if this drone was carrying a bomb over Karachi?

“You see, one can’t afford free use of drone cameras in Karachi. Our main concern is that it can be used for any terror or criminal activity. Such a machine can easily be used as an explosive carrier. There are several other issues as well which compromise security arrangements and that’s why we seek a complete ban on it in Karachi”

Firstly, I have no doubt whatsoever that Thebo’s concerns are justified as I warned of personal drones being customized to become weapons of targeted killing on December 2nd 2013 when I wrote the following,

“as technology progresses further and commercial and personal drones become more user friendly, will we see ordinary citizens adapting them in illegal ways, perhaps even using them for personal vendettas. Drones can be operated on land, sea and air, with seemingly endless possibilities for use depending on practicalities and individual imagination.

What about those with a grudge against governments… could insurgents adapt personal drones to carry home made bombs into checkpoints and do away with the “martyrdom operations”… the “suicide bomber”. Time to reflect on the case of Rezwan Ferdaus sentenced to 17 years by a US court for plotting to attack the Pentagon with the aid of an explosive laden model aircraft.

What about security at major events such as the Olympics and World Cup. Could such venues be targeted by personal drones… If a hexicopter can “whizz over” over a prison wall it can surely drop its load over a stadium. Will personal drones be the future of assassination, targeted killing? Governments have had the upper hand on drone technology in recent years but is that about to be challenged? What will governments think of drones then? There is an old saying, “what goes around, comes around” and that day may not be too far off!”

The hypocrisy lays in the fact that the government and security services are willing to allow drones to target alleged insurgents in Waziristan in “not so accurate” so called precision strikes which often kill civilians but want to protect those living in cities. Reprieve, human rights organization recently reported that, “US drone strikes in Yemen and Pakistan have killed as many as 1,147 unknown people in failed attempts to kill 41 named individuals.”

The following statistics are just two of the examples quoted to show the inaccuracy of drone strikes,

While plans are being floated to safeguard Karachi from threats, I am being told from a reliable source in the region that 3 civilians were allegedly killed in a very recent strike near the border with Pakistan, Afghanistan, “a taxi driver name Saz Gul…another was a guest and another local guy Ajmal too killed.”

Drones are the “Muslim killer” of the US. Those who support their use in Pakistan should ask themselves this, how many non-Muslims can they name that have been killed in a drone strike? How many whites can they name killed by drones? If the US was consistent in its policy to eliminate terrorists, why has the CIA never targeted white Christian alleged terrorists on its own soil. This is a war against Islam!

How can Pakistan claim to be an Islamic state when it kills its own Muslims? Now there are more division by drone… the city dwellers are protected whereas the predominantly Pashtun tribespeople in rural areas come under fire day after day.

‘If I am walking in the market, I have this fear that maybe the person walking next to me is going to be a target of the drone. If I’m shopping, I’m really careful and scared. If I’m standing on the road and there is a car parked next to me, I never know if that is going to be the target. Maybe they will target the car in front of me or behind me. Even in mosques, if we’re praying, we’re worried that maybe one person who is standing with us praying is wanted. So, wherever we are, we have this fear of drones.’

Sadaullah Khan, a 15-year-old who lost both legs in a drone strike (Reuters)

Article 33. No persons may be punished for an offense he or she has not personally committed. Collective penalties and likewise all measures of intimidation or of terrorism are prohibited.
Pillage is prohibited.
Reprisals against persons and their property are prohibited.

Is it any wonder that there are those within Pakistan’s armed services very uncomfortable with drone policy which violate the convention. Following my article that examined concerns regarding Pakistan Air Force alleged co-operation with US drone strikes and how those that wanted to speak out within PAF were being punished, a debate ensued. The following comment was left which is very insightful and the government, military and security services should take note,

“if the idea of using F-16s or Drones on Jhang, Lahore or other terrorist infested areas in Punjab seems repulsive to you. Then for a moment wear that green hat of patriotism, and think about the Pakistani civilians of Waziristan. Yes, there are terrorists hiding amongst them, but that doesn’t mean you flatten their homes from the safety of an F-16 or Drones. You get boots on the ground and make sure that they get the job done with minimum collateral damage. You don’t give them a clean chit just because they are holding guns. The problem with fear induced patriotism is that while it seems normal for those who are not paying the cost for it, it seems out-rightly ridiculous to those, who are bearing the brunt of its consequences. It is really difficult to chant Pakistan Zindabad when the state that housed their strategic assets in your homes, is now simply destroying your homes because it says it wants to get rid of those very strategic assets. And you are not even sure whether it means the latter either”

“If you shut up truth and bury it under the ground, it will but grow, and gather to itself such explosive power that the day it bursts through it will blow up everything in its way.”~~Emile Zola

There is more and more growing concern regarding the double standards for protecting civilians depending on location in Pakistan. In addition to the anticipated retaliation from insurgents, there are more and more protests from angry Internally Displaced Persons (IDPs) who see all they were forced to leave behind being destroyed by drone and jet.

Why are civilians in Waziristan not afforded the same protection as those in Karachi which also suffers from terrorist attacks? Why is it only tribal people that are expected to make sacrifices for a country that has allowed them to be droned by the US for a decade? It is precisely because those living in Karachi don’t want to be spied upon or incinerated in a drone strike and homes destroyed that there are moves to ban heli-cams and personalized drones which could be turned into bombs.

It will perhaps take a customized drone hitting an urban target to wake people up to the suffering of those who live under the daily threat, where children fear to look at the sky. It is not a case of “if” but “when” this will happen.

The unrest within the Armed Services on drones is perhaps the most dangerous. There have been a number of insider attacks in alleged collaboration with insurgents at Mehran Naval Airbase and more recently Karachi Naval Dockyard. When those trained to serve their country start fighting against their employers and their policies you have a major security problem that will become very difficult to quell.

“Drones: I predict personal drones will be used for targeted killing, what goes around comes around”

Carol Anne Grayson is an independent writer/researcher on global health/human rights/WOT and is Executive Producer of the Oscar nominated, Incident in New Baghdad . She is a Registered Mental Nurse with a Masters in Gender Culture and Development. Carol was awarded the ESRC, Michael Young Prize for Research 2009, and the COTT ‘Action = Life’ Human Rights Award’ for “upholding truth and justice”. She is also a survivor of US “collateral damage”.